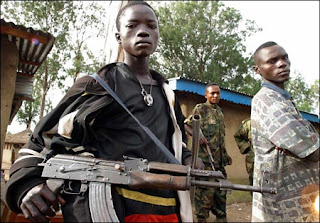 Some regions of the world seem to be mysteriously forgotten by the media. As if they were behind some dark and opressive curtain of silence while awful, unspeakable atrocities are committed.
Nicholas Kristoff, who writes for the New York Times, is an exception. He has been consistently writing about the war that's taking place in Congo which took around 7 million lives in the last ten years. What he writes is hard to believe: militias that cut pieces of  flesh from living victims and make them eat them. Young girls who are raped repeatedly for months and years to the point their internal are completely destroyed (if they survive, of course). People who are esventratewd in front of their families.
Enough of it.
The causes behind this war are multiple: etnical hatred, greed (minerium), violence coming from Rwanda, etc, etc.
One reads all this and has to wonder: what else is man capable of? What can we do?
Posted by Clara Pracana at 00:14 No comments: