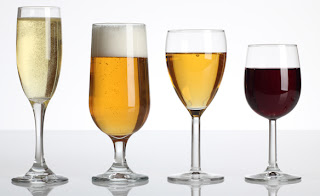 While the UK government just announced their 'alcohol strategy' (consisting of, amongst others, plans for a ban on the sale of multi-buy alcohol discounting, read more at http://www.homeoffice.gov.uk/publications/alcohol-drugs/alcohol/alcohol-strategy), Holland also has some plans. These exist of raising the excise duty on alcohol with 50%. On a yearly basis, this will generate 350 million euros for the Dutch government. Besides, less alcohol would be used (-5%) which will lower healthcare expenses.
I'm curious about other government's plans!
Posted by Esther Schuller at 21:23 No comments: