I recently gave a conference on Depression and had to search for paintings and poems which could illustrate the condition known as melancholia. The word comes from the old greek black bile and the disease has been known and studied for centuries. Old thinkers, like Aristotle,  connected it to creativity (specially poetry). Robert Burton dedicated to it a magnificent book in the XVI century: The Anatomy of Melancholia.
But melancholia it's a very severe case of depression and can be a rather serious disease, sometimes leading to suicide.
The person has emotionally invested an object (usually a person but it can be also an ideal) and when the latter disappears or fails in any way the result can be catastrophic. The object is already part of the self of the individual, has taken its place in it (as Freud famously said: the shadow of the object fell upon the ego). Being very difficult to let go of the object, the person retreats into itself, indifferent to the rest of the world, not caring about anybody or anything. Apathy and self-recrimination, even self-hate, are a constant symptom.
The best known painting is Durer's Melancholia but I really think Edvard Munch's painting by the same title better represents this awful condition that can border psychosis. Have a look at both of them: 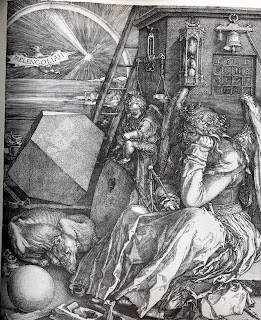 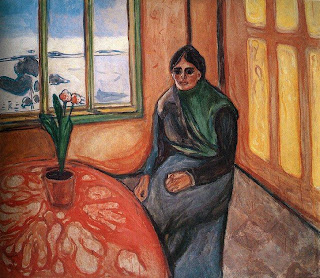 Munch
Posted by Clara Pracana at 17:56 No comments: